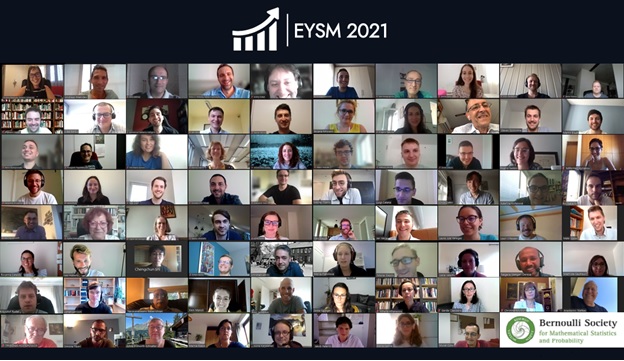 Depts. of Psychology and Sociology

The aim of the meeting is to provide a scientific forum for the next generation of European researchers in probability theory and statistics. It represents an excellent opportunity to promote new collaborations and international cooperation. Participants are less than 30 years old or have 2 to 8 years of research experience, and are invited on the basis of their scientific achievements, in a uniformly distributed way in Europe (at most 2 participants per country). The International Organizing Committee (IOC) is responsible for their selection. There were 32 European countries participating at the 22nd EYSM. Following the tradition of EYSM, there were no parallel sessions, and 57 invited young scientists gave 20-minutes lectures. The lectures of invited young scientists were divided into 15 sessions (3 sessions per day), 12 of them having 4 lectures, and 3 of them 3 lectures each. Sessions were set in such manner that lectures inside one session belong roughly to the same research area, or at least have something in common. The topics presented include, but are not limited to: applied statistics in biology, medicine, etc., Bayesian inference, change-point detection, characterizations of probability distributions, extreme and record value theory, functional statistics, goodness-of-fit testing, high-dimensional statistics, MCMC methods, regression models, robust estimation, spatial statistics, stochastic processes, survival analysis, and time series analysis, among others.

There were many memorable talks, and participants remarked on the high quality of the science and the stimulating discussions they encountered. The meeting ran very smoothly and succeeded to bring together young researchers across Europe, both probabilists and statisticians, and give each group an opportunity to learn what is current in the other’s discipline. The Local Organizing Committee (LOC) would like to thank the ERC of the Bernoulli Society for the opportunity given to organize this lovely event. The LOC is also thankful to the members of the IOC for selecting prominent young scientists to attend this conference, as well as to the reviewers of the papers published in the Conference Proceedings. The help of the administrative staff of Panteion University of Social and Political Sciences is very much appreciated, and a special thanks goes to the Sponsors for their assistance. Last, but not least, the LOC would like to thank all Keynote Speakers and Young Participants for providing an excellent scientific program, and great vibes that made this event special, providing invited young scientists the opportunity to present their recent research results, exchange experience, gain new knowledge and establish contacts, in the hope that this event will be a driving force for their future academic achievements.

On behalf of the Local Organizing Committee

Andreas Makridis, Postdoc, Dept. of Statistics and Actuarial-Financial Mathematics, University of the Aegean